THE ART OF TAROT TABLEAU READING

THE ART OF TAROT TABLEAU READING 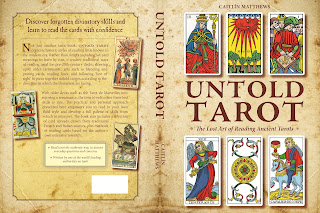 My new book Untold Tarot: The Lost Art of Reading Ancient Tarots is released on 28 September 2018. Here, I look at the older cartomantic ways of reading tarot, with a special emphasis on reading pips - the single most difficult aspect of older tarots for most taromancers. I also uncover directional reading, whereby the direction that any court or trump card faces determines relationship, action and meaning, and many methods that have been completely lost by taromancers but retained by cartomancers. This book does not call upon esoteric means to read the cards, but upon the skills that were used before 18th century French occult revival.

For most people the move from this:

to this:
is a little too much! We have become used to sumptuous pictorial pip tarots over the course of a mere century ago, and we have forgotten how we used to read before this or how to read cards without recourse to esoteric disciplines.  Reading the story that the cards tell as they fall out is an art that I hope to restimulate in Untold Tarot, hence its title.

In this blog, I want to open up tableau reading, using cards I laid back in January 2017 as an example.  A tableau is simply ‘a picture;’ it is still one of the more powerful cartomantic methods of divining because, having laid out a square or rectangle of cards, we can pinpoint precisely where the querent is in the issue, looking where in the tableau it has fallen, noting what is above and below, or to either side.  Tableaux, although they are the most traditional ways of laying cards, look troubling to the modern taromancer’s eye as there are so many cards, but be assured, we read them selectively here. Where the significator shows up in the tableau tells us a lot: the position they land on, the cards that surround them, the direction that they’re facing, the card they’ve turned their backs on, the whole hidden agenda.

Tableau reading has tended to remain with cartomancers who use playing cards, but tableaux with tarot were common in earlier centuries. An example can be found Casanova’s Memoires, where the libertine, tells us that his young mistress, Zaïre, jealously accused him of his debaucheries by laying ‘a square of twenty-five cards wherein she makes me read all the debaucheries that had kept me out all night long.’ After her detailed reading, which is unfortunately not given, Casanova heaved her entire pack of cards into the fire in disgust.
Below is a tableau of twenty-five and how to read one, enabling you to discover the precise nature of an issue by giving you the surrounding landscape of the story, allowing you to glimpse where the querent is within their story.
TABLEAU METHOD
1. Shuffle in your pre-selected significator, and divide the pack into 3 equal piles of 26 cards each. Look through each pile to find which the Significator is in, without changing the order of the cards.

2. Discarding the other two piles, lay out only the Significator pile of 26 cards into 5 cards x 5 rows, placing the last 26thcard in the row nearest to the Significator, or at the edge if it has fallen there as in the example below. This card shows how the querent is facing the question or it act as an ally or the querent’s conscience.

3. Note where the Significator falls in the ranks. Each horizontal row gives us a clue as to the querent’s condition: in the top row, the querent is at the top of his game; in the second row, he’s still pretty good; in row three, things are middling; in row four, it’s beginning to be poor; in row five, things are not good.

4. The columns reveal where the querent is in her story:  in column one, she is just starting out, while in column five, her story is coming to an end. The columns can also be related to time, with the column in which the Significator has fallen being ‘now,’ the ones to the left the nearer or further past, the ones to the right the nearer or farther future. The cards can be laid as follows:

5. Look over the whole tableau and note any clumps of cards that sing out immediately, then turn to the breakdown.  There are many ways of reading what is there, including:
A. Read the Corners as a statement: 1 + 25 and 5 +21. This gives the outline of the story.
B. Read the cross of cards above, below, and either side of Significator.  If it is at an edge, use the extra card to complete the cross. What’s above, below, to left and right of them?
C. Check the Pivot card in the central 13thposition. This shows the issue’s origin or fixation.
D. Check the Diagonals leading to and from the Significator.
E. Read the inner cross: 8,12,14, 18 and the outer cross 3,11,15,23.
You can also look at interrelations between cards by means of knighting - the steps away from the card, in any direction, that are like knight's move in chess: two steps up, down, or to either side, and one step to the left or right.  By mirroring - comparing or pairing cards that are at opposite ends of the tableau - we can determine how things work out dynamically.

TABLEAU DRAWN FOR THE INAUGURATION OF TRUMP
on 20th January 2017

The preselected significator of King Deniers stands for Trump himself, found at the beginning of the 3rd line. The extra 26th card is the genius or power that governs him, the King Swords.
The corners of the tableau tell us that this is a story of how a democracy plays out: nearly all cups, if we include Temperance: the electorate voted to divide the country and put it in state of disharmony and challenge, putting everyone on their guard.  This is not a civil war, but it is feeling like one. The Centre card of 8 Swords shows the state of the country: disappointment, on-going trauma, stickiness, and the niggling of his shifting words and uninformed sayings.
Trump himself is represented by King Deniers, as a businessman, and he has turned up in the centre line, making a sandwich filling between the other lines. He looks to Popess who is not going to answer his overtures, however he objectifies her. I see this card as the spirit of the US herself, since it is a motherland, but here we don’t have the nourishing mother, but rather the stern mentor.  Behind her is 8 Swords, 2 Batons and 8 Batons: a fearful state of mind is battling with a sense of stuckness, as this inaugural day makes clear how trapped much of the country feels.

Trump himself knights both Queen Cups and the World, so while he will try to come over all appealing and sympatico on the world scene, under him is 10 Swords where our worst fears are realized and where paranoia and conspiracy-mindedness rules the roost. Over his head is 2 Swords which shows his mindset is pretty self-conflicted. He can believe two impossible things before breakfast.  To his left, is his genius, or what motivates him: King Swords gives him a hard and uncompromising front, where everything is always falling into aggression.
What strikes me are the two10s in the middle column: there are three tens in the reading overall, which means accelerating intensity – the only ten that is missing from this is 10 cups, so we don’t expect an over-plus of love and compassion in this administration! We have, in order, 10 Deniers and 10 Batons – this probably tells us what we need to know that, in the pecking order of priority, Trump’s interests are financial first, with business interests being the bottom denominator, so expect policies driven by business interests.
Trump’s personal style is seen in the knighting with 5 Batons in top line: this shows us his boorish machismo. Also knighting him on the bottom line is 6 Deniers, which perhaps betrays a certain miserliness which is going to play out, between those two Queens of Swords and Batons, as a fiscal meanness.
Looking ahead we have a tangle of Batons in the mid right section: 2 Batons becomes 4 Batons below, signaling bureaucratic disorganization, with 8 Batons to the right, there will be an attempt to pull things into better organization, but I suspect it will be easier to scrap the whole system that he builds up, frankly.
The two Cup courts in the reading bear looking at, as they seem to typify Trump’s sickly attempts to present as a good boy or conciliator, but they both involve his trying to backpedal the effect of Swords: Page Cups is looking towards 10 Swords, while Queen Cups is turning her back on Fool with Knight Swords.  Page of Cups is Trump the good boy trying to sweeten the pill of all-out aggression and war. Queen of Cups is having a hard time trying to ameliorate 2 and 6 Swords together which I suspect is about learning to live with the choices he’s made, if Fool and Knight Swords have anything to do with it. This last combo is a Don Quixote style aspiration of his: he wants to be the shining champion but he just looks like Sancho Panza.
If we see Page Cups as Trumps' minion, then anyone working for him is going to be going cap in hand between his aggression and the world powers. The Page has the Popess overhead, and the 6 Deniers below showing that, as public servants, while they are mindful of the public good, they will end up appearing in a worse light than their president.
Is there any hope here? Star with 5 Cups in the upper right corner: the duration of this term will probably prove to be a time of developing female strategy so that, come the next election or next government, women will be seen as essential in the governmental mix.  This is borne out by the mirroring cards, bottom right corner:  Queen Batons and Temperance – this could well indicate a female president in the future, someone who will temper the extravagances and inequities of what will be seen as a biased presidency.

Analysis: 6 Swords, 6 Batons, 3 Cups, 2 Deniers, 5 trumps. This will be a contentious and combative term of government, in which the balance of world power is going to be polarizing Trump by reflecting compassionate or humanitarian views, which will be largely ignored. The cross about the central card: Queen Cups, Popess, 2 Batons and World surround 8 Swords – reason and compassion are trying for a short period of time (a traditional meaning for 2 Batons) to integrate him into the World stage, but the far cross of 10 Deniers, King Deniers, 8 Batons and 10 Batons are destabilizing factors: with shady deaings across the water, where Trump creates malcontent.

There is much more in this tableau that could be pulled out, but I leave further analysis you yourself. There is much that we could add, in retrospect, as this presidency is still with us. I hope that you will find some new ways to read here, find the confidence to try an older tarot, and enjoy finding the untold story for yourself.

Posted by Caitlín Matthews at 05:16