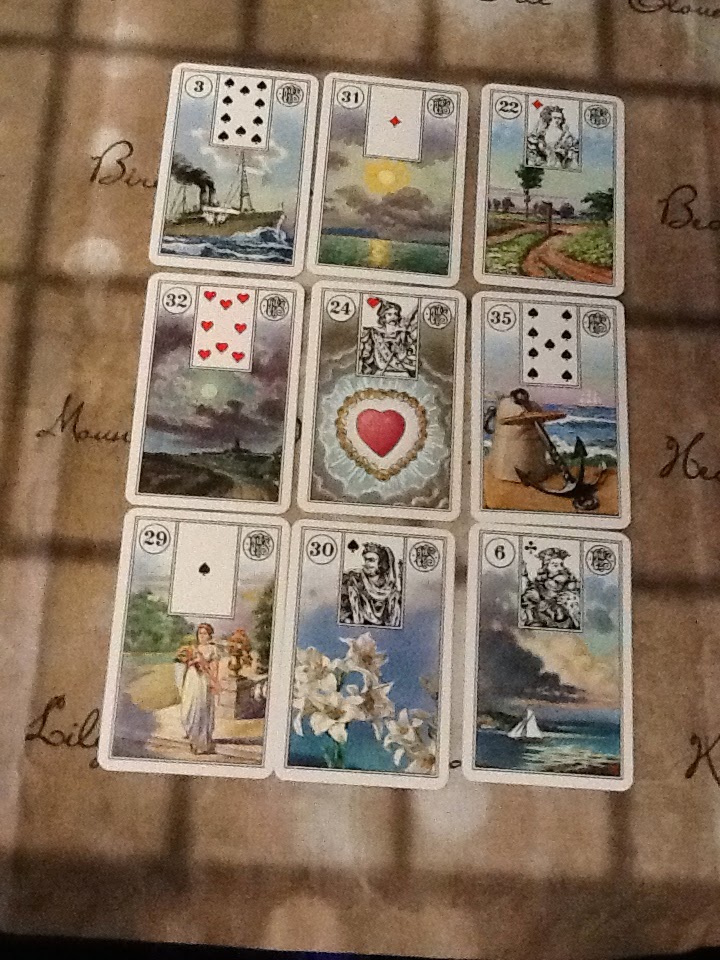 I stated in the previous blogs of this Cartomantic Mindset series that we read Lenormand by juxtaposition and that positions were something we could forget. Well, let’s modify that now and look at the cards from a cartomantic mindset.  When we begin reading in tableaux, when cards are laid in ranks of 9 or more cards, we are always interested in where the Significator or topic card falls and which cards touch it.  Here is what I mean, using the smallest possible tableau of cards, which is a Portrait or 3 x 3 frame.

Taking the central position 3 x3 as the Significator or topic (subject) cards, then the cards above, below, and to either side of it are said to be touching.

Above you
Behind you          Significator    Before you
Beneath you

Above your head: shows conscious concerns, motives, plans and thoughts or worries.
Below your feet: shows how you are rooted, grounded or any unconscious motivations.
Left or Behind you: shows the past, trigger, conditioning
Right Before you: shows the future, likely outcome or result

There are also the four diagonal positions leading from the Significator which, though they don’t touch the central card,  are influential upon it. In the image above, I've moved the four corner cards out for emphasis, but they are representing:

While calculating timing is a wholly different ball-game, I must say that I personally do not look at past and future very often but treat all the cards as speaking about the issue.  (If you want to check out specific timing, rather than the past, present and future of a spread,  I recommend chapter 12 of my new book The Complete Lenormand Oracle Handbook.)

In this example,  I was asking for more information about a proposal I had received to go and teach abroad for a course centre. All cards were randomly laid. I am not going to break down this 3x3 tableau in the usual way, but look at it from the perspective of the touching cards. Note that in the Enchanted Lenormand above that the Clouds have their light side to right. The cards depicted are:

At the heart of the reading is Letter, which I read as ‘the terms and conditions’ of this proposal: I was most concerned about this since  the organizer had been very vague in his email about payment and other details. By looking at the touching cards I immediately get the dynamic. Over the Letter’s head is Clouds (confusion), showing that there is uncertainty about the small print of this contract, but below Letter, is Clouds’ opposite number, Stars (clarity,)  which is always the basis for any agreement that I want present before I finally make up my mind. Before Letter is Ship (travel, overseas) and after it is Fish (money, payment.) These are all issues that speak about the immediacy of the issue.  To discover more, I will have to look at what’s going down on the diagonals.

So we notice the positioning of the touching cards AND we also read the combinations of one card with another.  We don’t just pin a card to a position in a tableau and leave it there, we get combining in a variety of ways.

I read the corners which will give me a frame for this story:
top left + bottom right, with top right + bottom left. Tree (health, ancestors, long-term) + Snake (deception, complications, rivalry) and  Lilies (old, patience, protection, peace) + Birds (talk, gossip, phone-call.) This gives me the story in brief: ‘a protracted set of complications,  in which I patiently call and email for more details.’

I read together the cards of the central diamond: (the cards actually touching the central card)  Clouds, Ship, Fish and Stars which surround the central card, which gives me, ‘Uncertainties about going abroad and being paid clearly.’ I can also read the cards in columns in rows across, giving me even more information:

Then I read the cards in columns to see what else is here:
Tree + Ship + Birds = Ancestral course overseas is talked about
Clouds + Letter + Stars = Confusions in terms are clarified
Lilies + Fish + Snake =  Patient about money complications

There are more processes I could have applied to this tableau, but this is enough to see pretty clearly.

You will want to know what happened. Well, since I was going to this same country anyway for a larger event, I tacked this course invitation on at the front on my visit. The conversations by skype between me and the organizer ascertained that payment would be given me at the end of my course, before I Ieft the country.  However, that afternoon, the organizers suddenly found themselves mysteriously without the money to pay me! Some was given me in cash and the rest I had to hassle them for: finally they paid me some 2 months later, having said that they were ‘waiting for me to invoice them’– this had never been discussed or asked for, of course, but I did finally receive my money.  What is so ironic about this reading is that Letter also stands for ‘invoice’ or ‘bill.’ With Fish next to this, I should have noticed, since this would have made Letter + Fish  or ‘payment invoice!!’  Well, we cannot always have our cartomantic heads on!

READING THE CARDS AGAIN AND AGAIN

While in Tarot we would normally read the cards in any spread just the once, and give them just a summarizing look-over at the end, in Lenormand cartomancy, we scrutinize a spread in more details for a lot longer, as you have seen here. Because we’re not reading cards on positions, we sometimes need more processes to extract the information. This will entail reading a card in more than one way. A card that crops up as ‘the past’ might also be read again as part of a different combination or part of a further scrutiny, as you can see here.  You will see above that I read Tree as ‘long-term’ and also ‘ancestral’ – both are legitimate meanings and both were relevant, since this course was about the ancestors. By utilizing the different permutations and processes of cartomantic reading, I get to build up a full picture.

These processes seem to some folk to be extraneous and indeed, not every Lenormand reader would utilize all of them for every spread, but if you’re having a hard time understanding something or you have an uneasy feeling that all is not what it seems, then you go to the deeper layers and have a look-see.  These processes sometimes reveal the hidden dynamic which you might of missed, but mostly they confirm what you first saw, which is never a bad thing to have. As you’ve seen from my example above, you don’t always need all the processes or layers because the message of the cards is loud and clear.

In the last blog next time, we’ll summarize what we need to make the switch from Tarot into Lenormand reading. Not in order to give up reading Tarot, you understand, but just so you can get your cartomantic mindset in place when you start moving those Lennys into line!

Posted by Caitlín Matthews at 04:24