If you are familiar with Tarot and are wanting to approach Lenormand for the first time, then this might be a helpful place to start, to understand why and how reading Lenormand is so different. If you approach Lenormand with a cartomantic mindset, you will arrive prepared.

Cartomancy is the craft of divining from cards. While it is a word often applied to playing card reading these days, it is a useful term for anyone who is taking up Lenormand reading for the first time.  Lenormand cards are read cartomantically, which is an older method of reading cards, which I’m going to outline here.
Before Tarot went esoteric, before Lenormand cards were even born, people were laying out playing cards and reading them by juxtaposition with each other.  It is from this era that we inherit the cartomantic style of reading that is used in Lenormand.
The image below is Etteilla’s spread called le Coup de Douze  (12 card Spread – and yes, it does have two extra cards for ‘the surprise.’) This is taken from the very first published book which outlined practical cartomantic reading with a pack of 32 playing cards, The Only True Way to Read the Cards, published in 1773. 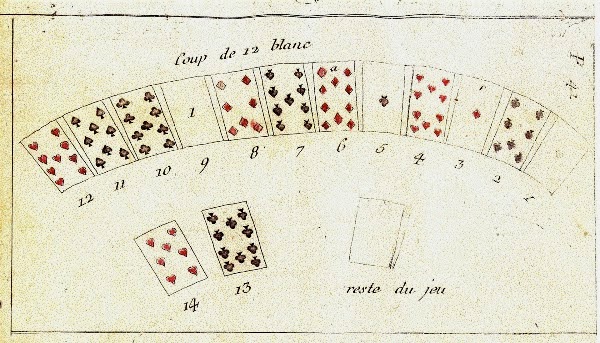 Etteilla read the cards from right to left (most modern cartomancers read left to right today and that is still the case with Lenormand cards) and used reversed cards (which Lenormand reading does not). We see that the carte blanche (the blank card that acted as the Significator) is centrally placed here. The cards either side of it, which touch the Significator are King Hearts and 10 Diamonds, signifying a Blond Man who has an abundance of money, respectively.  The line is read by pairing card 1 with card 2, card 2 with card 3 etc.  until the line is read. This method tells the story as cards blend together. Many years later this same Coup de Douze  spread was taken up by the Golden Dawn and translated into the fiendishly complex Opening of the Key spread, which takes several hours to lay and read.
Here is the case in point: cartomancy is simple, pragmatic and non esoteric.  It doesn’t depend on a knowledge of astrology, it doesn’t require you to know which phase the moon is in, you don’t need to know numerology.  This is one of the reasons why Lenormand is non-esoteric in nature and why we read in the ways that we do now: because the reading style dates from before the esotericizing of tarot in the mid-late 18th century, which was begun by Court de Gebelin and Comte de Mellet, and to which Etteilla himself contributed, though not before recording his own cartomantic methods.


The older style of cartomantic reading is one that is nowadays only used by playing card readers and cartomancers who use small oracles like Lenormand.  It comes from a different mindset and, without taking this on board, it’s easy to try and read  Lenormand like Tarot, which won’t help you at all. The art of reading a line, combining the cards as you go, is where this kind of reading began.

In the next blog of this sequence, we’ll look at the specifics of how Lenormand and Tarot are different and how this affects the style in which we read.

For those who like to read with traditional, historic decks, I thoroughly recommend the cards produced by Lauren Forestell: these facsimile  decks are printed on good linen cardstock, with clear images.  http://gameofhopelenormand.bigcartel.com/

The One and Only Petit Etteilla Course
by Caitlín Matthews 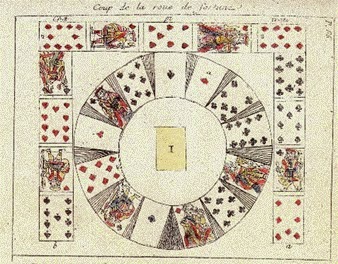 Etteilla (1738-1791) wrote the first self-instruction manual on cartomancy in 1770, enabling readers to divine with a piquet deck of 32 playing cards.  Written before the impact of esoteric tarot, this influential book revolutionized divination.  Its unique methods of reading have remained largely unexplored by readers who have been deterred from studying them because his work was written in 18th century French or not available in English.  Now for the first time, his book can speak directly as you learn to read Petit Etteilla for yourself.

On the One and Only Petit Etteilla Course (so called in echo of Etteilla’s own style of writing!) you will create your own Petit Etteilla Deck, learning how to apply his 18th century meanings in a more helpful modern way.  The complete text of his book is translated and explained clearly so that you can read for yourself how his methods work.

Throughout his book, Etteilla gave many spreads outlining the case history of one woman for whom he reads sequentially. He invites you to lay out the cards for her, just as he has done, so that you can learn his methods quicker. The original illustrations from his 18th book are included so that you can follow him.

The text is arranged over several lessons, so that you understand the source material for yourself and how it is applied in practice.  This is supplemented by my explanations, examples of spreads and case histories so that you begin to learn the methods by daily practice.  I also provide smaller spreads that can be practically used on a daily basis.

The course enables you to learn cartomantic combination from Etteilla’s keyword meanings. This precise method of reading is very different from the interpretations of Tarot reading but, because all the meanings you will ever need are already written upon your cards, you can immediately read and combine them without the need of memorization. By building up your reading from simple pairing and short line spreads, you will gain confidence and soon be reading Petit Etteilla for yourself and others.

Features of this course:

Posted by Caitlín Matthews at 04:07