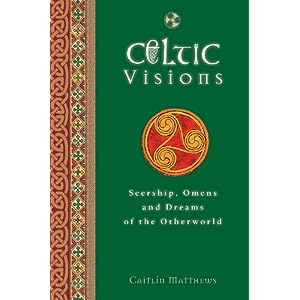 ‘There was a tall man sitting next me, and he dressed in grey, and after the Mass I asked him where he came from. "From Tir-na-nOg," says he. "And where is that?" I asked him. "It's not far from you," he said; "it's near the place where you live."- Mrs Sheridan, in Lady Augusta Gregory’s Visions and Beliefs in the West of Ireland,
What we see and what we imagine has one connected life, but it is only when we enter into dialogue with the otherworld that we understand that.  It is 'not far from us.' Seers and visionaries perceive that the spiritual and emotional meaning of life is not found just on one shore of reality but is brought to us by the tides originating on the further shore, by way of dream and impressions that we today tend to neglect as irrational promptings of no account.
What if we were to live as if that dialogue were the truest thing we ever did? As a hunter examines the grass for the track of the deer, as a lover looks for response in the face of the beloved, so we too need to search the hinterland of that further shore with imagination and intelligence.
For the people of the ancient Celtic world, seership opened windows into the otherworld,  awakening the essence of true vision and wisdom which was known by the poets as the gléfiosa or ‘the bright knowledge.’
Seership connects the two sides of reality: both the physical world which is perceptible by our everyday senses, as well as the invisible, unmanifest world which we perceive with our inner senses.  When seers go seeking, they expand their consciousness to perceive the wider reality of the whole, able to sense from the movement or location of animals the coming of a dangerous event or when a sickness augurs death.
The primordial condition of the human soul is based upon metaphors of perception: the symbologies of this primal language of the soul are received by the inner senses and conveyed primarily through the images and metaphors of storytelling, song and poetry.  When viewing a landscape, the seer sees not just the hills or rivers but a living world in which the sound of the waters, the wind through the trees and the movements of animals are meaningful.  Each place has its own memories where certain teachings or stories may be remembered.  A land-feature has power to reconnect the physical and unseen sides of reality, becoming a threshold where past, present and future fuse into a single focus for knowing and understanding.
Some people are born with the ‘second sight’ which, in Gaelic is called an da shealleadh, literally meaning ‘the two seeings.’ Possessors of the second sight perceive not only the physical semblance of a person or event but also its spiritual aspect as well.  In an age which welcomes all kinds of signs and wonders, it should be remembered that the second sight was and still is not a welcome gift, for it comes unbidden and can seldom be ignored or removed,  only ‘tuned down.’
Seers were pragmatically sought out to find lost people or animals that had strayed, to discover news of far-travelling relatives or those who went into battle in an age with no instant means of communication.  The interpretive skills of the seer might be welcome in times of need or very unwelcome indeed when the seer’s seeing brought inconvenient truths to the surface.
Methods of Celtic seership and vision have been my study for many years, both from written sources as well as from oral transmission and personal practice.  With many students worldwide, I’ve explored how these methods can work today.  Seership is an inborn gift but vision is a skill that can be re-awoken within us by patient observation and faithful practice, by stillness, and the absence of stimulus or interruption. By slowing down, carrying a question patiently within our hearts, we can consider the evidences of our heightened senses and the verifications of our dreams.  This book offers a short study of Seership and has its own pointers to the development of vision.
CELTIC VISIONS: Seership, Omens and Dreams of the Otherworld. Watkins, 2012.
available from http://www.hallowquest.org.uk/
Posted by Caitlín Matthews at 06:36